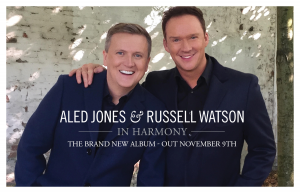 On November 9th 2018, Aled Jones and Russell Watson, two of the world’s greatest classical voices, come together to release their debut album In Harmony, out via BMG.  The pair will take to the stage together for their first joint UK tour throughout September and October next year.

Having moved in the same circles for nearly 20 years and since becoming firm friends; Aled approached Russell to collaborate for his next big project. The album features a wealth of well-loved hymns, arias, and popular songs – ranging from stunning arrangements of “Ave Maria” – to more modern classics such as “You Raise Me Up”.

Tour dates are on sale Friday 19th October, but fans that pre-order the album from the official Aled & Russell store can get pre-sale access on Wednesday 17th October.  Head here for info: https://InHarmony.lnk.to/StoreWE

How Great Thou Art

Where Have All The Flowers Gone/Here’s To The Heroes

May The Good Lord Bless And Keep You

Where Should This Music Be? (Nimrod)

You Raise Me Up